A Magical Dog Tail In the Cycle of Life

Here's a Magical Dog Tail that speaks to the interconnections in the cycle of life.

I recently re-took a couple of Animal Reiki classes with Kathleen Prasad to deepen my Animal Reiki knowledge and learn her Let Animals Lead® Method.

The workshops were held at Lily’s Legacy Senior Dog Sanctuary, which is dedicated to the care and rescue of large senior dogs. It’s a special place located amid the picturesque rolling hills of Sonoma County in California. 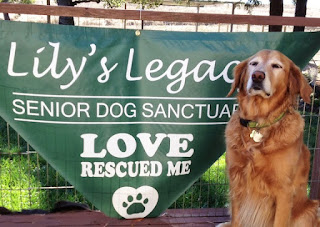 Based in Petaluma, this unique Senior Dog Sanctuary was founded by executive director Alice Mayn in memory of Lily, a 14-year-old golden retriever she had fostered for only four months. It's Lily's Legacy's mission to provide safe and loving homes for large breed senior dogs who have been displaced from their homes and/or abandoned for any reason, until they are adopted or to remain at the sanctuary until they pass on.

Throughout the first day of the Animal Reiki 1 workshop, a large male Canadian Goose sat closeby to our group. The longer he sat near us, the more connected I felt with him. I sensed he was there because he enjoyed sharing Reiki with us.

The Canadian Goose made such a big impression on me, I wrote a Haiku about our encounter. 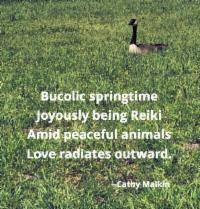 A month later. I returned to Lily’s Legacy to re-take Animal Reiki Level 2. Although the calendar said it was mid-May, the weather had different ideas: it poured cats and dogs throughout the day. Due to the inclement weather, Alice graciously opened her home to the class.

During the workshop, I sat beneath a portrait of Lily that hangs over the living room fireplace. Throughout the day, I felt Lily’s wise, loving, and compassionate Spirit reaching out to me as she shared several telepathic messages with me.

I clearly understood Lily's first message. Lily expressed her gratitude for the Reiki being shared by our group.

Lily had another message for me that I couldn't figure out the meaning of at the time. It's not unusual that the interpretation of a telepathic message isn't immediately known. My many years as a professional Animal Communicator has taught me to let go of my expectations and allow the message's meaning to unfold organically, even if it takes weeks, months, or longer. Experience has shown me that I will figure out the purpose of her communication in time if it’s meant to be.

Now, this is where my Magical Dog Tail starts to get interesting:

In mid-June, I was talking with my cousin, Rebecca, who lives in Petaluma. I called to let her know that I had partnered up with Lily's Legacy to teach my Animal Communication courses there. I asked Rebecca if she’d heard of Lily's Legacy.

Rebecca enthusiastically responded, “I know Lily's Legacy! That’s where my father, Richard, adopted his last dog from before he passed on.”


Sadly, my Uncle Richard died a few short months after adopting Cruz. My three cousins knew they couldn’t give Cruz the life he deserved. With a heavy heart, they returned Cruz to Lily’s Legacy. Rebecca said it was a hard decision, but they knew it was best for Cruz.

Lily’s Legacy was supportive and kind about taking Cruz back, which came as no surprise. Thankfully, Cruz was quickly adopted into his forever home with a loving couple who adored him.

But the story didn’t end there and in many ways gets more intertwined.

When it was time to find Richard's final resting place, my cousins decided the best place to scatter his cremains was among dogs. He was a huge dog lover and happiest when he was with his dog.

Unbeknownst to me, my cousins decided Lily's Legacy was the right place to scatter Richard’s ashes. With permission, they spread his ashes throughout the property: in the pond and in the fields so Richard would rest eternally with the dogs.

As Rebecca relayed Richard’s and Cruz’s story to me, I got goosebumps and chills. I then realized what Lily communicated to me on that cold rainy day in May. Lily wanted me to know my Uncle was with her and "hanging out" at the Sanctuary.

It also became clear that the Canadian Goose was a sign from my Uncle to let me know that he was happy with his Eternal Resting place and was resting peacefully at Lily’s Legacy.

A few weeks after my conversation with Rebecca, I decided to visit Lily’s Legacy’s Facebook page. To my surprise, there was a picture of Cruz and a post that said he died on Father’s Day.

This is what Lily's Legacy wrote about Cruz;


“Dear Team Lily… Jason and Suzanne adopted CRUZ from Lily’s after this poor dog lost two owners. No one expects the owner to go first. Cruz was the FIRST dog to set paw on Lily's new permanent home. They gave him the most wonderful life a dog could imagine. Sadly, CRUZ lost his battle with pancreatitis. Run free CRUZ.. you will be missed.”


Now Cruz and my Uncle Richard are reunited across the Rainbow Bridge. It's my belief the two of them are hanging out at Lily's Legacy together, helping senior dogs in needs.

stefanicohenlcsw said…
Love this story and the interconnections and the messages from "beyond" - thanks for sharing.
June 26, 2019 at 5:54 AM

Did you know more pets go missing over the July 4th holiday than at any other time of year? Independence Day is my least favorite holiday because so many animals are traumatized by its loud pyrotechnics and fireworks displays. While it may be fun for some humans, it scares and disorients pets in a matter of seconds, causing them to  meltdown in complete terror, with many trying to flee f rom the safety of their homes only to go missing.  Why? Animals become anxious and scared when they hear loud noises and see bright flashing lights. Their instincts tell them to run as fast and far away as possible to escape the source of their fear and anxiety. Throughout the Independence Day weekend, your pets will hear noises you might not be aware of because of their sensitive ears and nervous systems. Once an animal becomes frantic, it's difficult for them to calm down. Therefore, it's better to prevent your pets from becoming distressed in the first place. Once in the "red zon
Read more

It still feels surreal, and a lot like a miracle, that my 15 year old Siamese cat, Elvis, vanished into thin air a few weeks ago, only to return inexplicably 12 days later. One minute he was in the house, and the next minute, Elvis had left the building. This was odd, given that Elvis is an indoor-only cat. The day before he disappeared, Elvis communicated telepathically that he “would be leaving me soon.” I was startled and concerned. Leaving me? What was Elvis talking about? Unfortunately, he didn’t elaborate. Elvis I wasn’t sensing that Elvis was ready to transition, although he hadn’t been feeling well recently, due to a spate of vomiting up hairballs. In an ongoing effort to keep the formation of hairballs to a minimum, I brush his beautiful, medium dense coat daily. In all other aspects of his health, he seemed fine. I told Elvis he was going to be fine, kissed his adorable face, and went on with my day, pushing his cryptic message out of my mind. The next mor
Read more

9 Ways to Cope with Pet Loss

Saying "good-bye" to a beloved animal companion is life-altering.  Mourning the loss of the pet can be devastating and overwhelming.   My Beloved Kobe Bear (Now In Spirit) In the past couple of months, my dog Bodhi Bear and I have said "goodbye" to our two dear dog friends that we  affectionately refer to as our DFFs or "Dog Friend Furever." MacGuyver the Puggle left in June. A couple of weeks ago, Sabrina Renee the Golden Retriever also transitioned home to Spirit. Needless to say, we miss our DFFs a lot. MacGuyver the Puggle (Now In Spirit) One reason why we grieve so deeply for our pets is the unconditional love and acceptance we share with them.  It's essential to deal with the pain and sadness because avoiding the grief can be far more debilitating. Not dealing with your grief can prolong your suffering.   If you didn't love your pet so much, you wouldn't grieve so deeply. In other words, the intensity of your
Read more