A couple of Sundays ago, I saw my neighbor Kevin running frantically towards my house with his dog cradled in his arms. The look on Kevin's face told me something serious had happened to his Cavalier King Charles, Gigi.

As I quickly opened my front door, Kevin told me that while Gigi was sniffing around in the grass, when right out of the blue, she screamed and jumped. He said Gigi immediately started to kick and bite at her back right knee after she screamed. He was positive she had been stung by a yellow jacket, which is a wasp not a bee.

When I asked Gigi what happened, she confirmed with me telepathically that it was a yellow jacket that bit her. She said her leg felt hot and it really "stung." Despite panting nervously and biting at her leg, Gigi seemed to be okay. I told Gigi to hang in there and we would make her more comfortable as soon as possible.

I suggested to Kevin that Gigi would benefit from a baking soda poultice and Reiki to help ease her suffering. Reiki, which is a Japanese Energy Healing System, means "Spiritual Energy." Rei translates into "spirit"and Ki means "energy." According to the Animal Reiki Source,


"Reiki is ideal for use with animals because it is gentle, noninvasive and doesn't require physical contact. It doesn't cause stress, discomfort or pain, and yet yields powerful results. Animals respond intuitively to Reiki's power to support the healing of emotional, behavioral, and physical illness and injuries."

Kevin seemed relieved that I knew how to help his "princess" since his wife and daughter weren't home. So Kevin said, "Let's do it!"


Poultices, which have been used for years, draw toxins out from the body like wasp/bee stingers and neutralizes the painful venom. They are super simple to make and quite effective. In Gigi's case, I mixed together a 1/4 cup of baking soda (sodium bicarbonate) and some water until it became the consistency of paste. If I had been outside, I would have made a mud poultice for Gigi, which works just as well.

Once prepared, I gently placed the poultice on Gigi's leg, careful not to break the "venom sack" around the wasp stinger.  I then began to offer Gigi Reiki, which she gladly accepted.

About a minute or so later, I removed the poultice. Gigi communicated to me that she felt stinger was gone. She also said the awful "stinging feeling" from the wasp venom was easing.

Gigi had calmed down enough to take a couple sips of water and eat a Charlie Bear cookie I offered her. Both excellent signs she was well on her way to recovery. I then gingerly handed Gigi back to her "Poppa" and sent them home.

I continued to offer Gigi Reiki from a distance after they left. About 45 minutes later, I felt Gigi say that the Reiki had helped her a lot and she was ready for a nice long nap.

Later that evening, I received a text message from Kevin saying Gigi was doing great and back to her normal self with no evidence that she had been stung by a yellow jacket. He felt the Reiki and the baking soda poultice helped Gigi a lot and was incredibly relieved and grateful for my assistance. The best part of the text said Gigi took a nap about 45 minutes after they left my house!

I am grateful that I know how to offer Reiki to animals especially in situations like Gigi's. Reiki has the ability to calm animals down so they can relax. Once relaxed, than the animal's innate healing process kicks in.

Many Benefits of Reiki for Animals and You!

This chart outlines some of the many benefits of Reiki. Reiki heals animals and humans alike. Animals love Reiki because it's gentle yet non-invasive. In my experience, animals clearly recognize the healing benefits of Reiki and love it when Reiki is offered to them. So what are you waiting for? 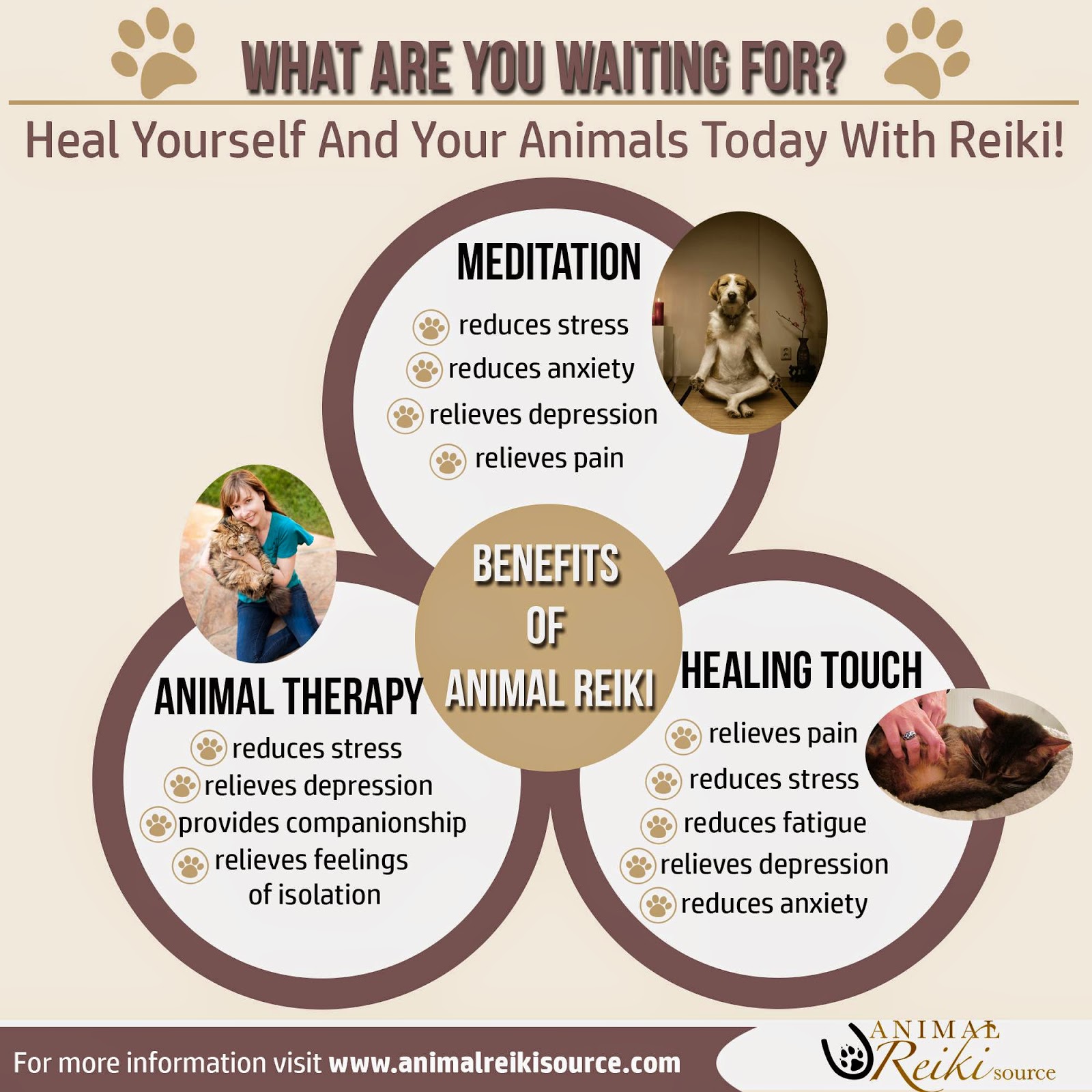 Thank you Kathleen Prasad and the Animal Reiki Source for sharing this information.

This incredible video showcases how Animal Reiki creates peace for stressed-out shelter dogs. Watch as my Animal Reiki Teacher, Kathleen Prasad, offers Reiki to dogs at the SPCA in Oakland, California. Within 35 minutes of offering them Animal Reiki, the shelter dogs became peaceful and quiet as they relaxed and calmed down.

As an Animal Reiki Teacher and Practitioner, I continually experience firsthand how powerful yet gentle Reiki is when offered to stressed animals like these shelter dogs. It doesn't matter if an animal is in a shelter, ill, anxious or transitioning, Animal Reiki helps animals with all aspect of their lives.

Posted by Animal Musings at 11:20 AM No comments: